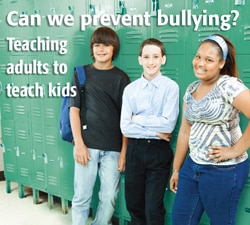 Held at the Wosk Centre, the half-day event attracted almost 150 academics, teachers, policy-makers and parents. Pepler spoke for roughly 45 minutes making a convincing case that social learning is just as important as academic learning and that Canadian children are socially behind children in other countries. Her talk included several videos of children in playgrounds being bullied.

Following her presentation, members of the audience contributed their observations and feedback. “Can we prevent bullying?” was the Mowafaghian annual Children’s health policy visiting speaker event.

Can we prevent bullying? Join us for a May 7/14 event 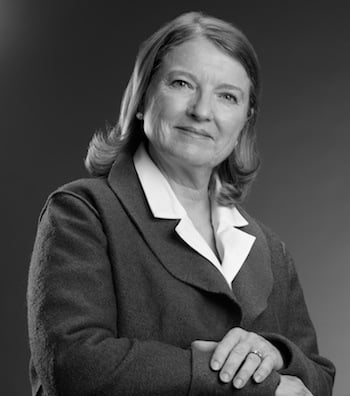 When it comes to the three Rs, Canadian children and youth are doing well. A 2013 UNICEF report shows that Canada ranks 2nd out of 28 countries in terms of educational achievement. But the story is not so rosy for the 4th R — relationships. In the same UNICEF report, Canada ranks 25th of 28 countries in the quality of the relationships children and youth have with their parents and peers.

“We really need to close the gap between our relative success in educating our children and our children’s dismal reports regarding essential relationships,” says Debra Pepler, a York University Distinguished Research Professor who will be speaking in Vancouver on May 7 as the 4th Annual Mowafaghian Child Health Policy Visiting Speaker.

“Learning about relationships is much more difficult than learning to read or work with numbers,” she says. “Every relationship is different and even the same relationship varies from day to day.”

Why are relationships so important? Research by Pepler and others has shown that the quality of children’s relationships is about more than simply “feeling good.” It shapes gene expression, brain development, behaviour, and long-term health.

In her interactive presentation, Pepler will describe the five general strategies her group has identified for promoting positive relationships in order to prevent bullying. Her group — PREVNet (Promoting Relationships and Eliminating Violence Network) — has been active since 2006 with funding from the federal government.

The event, which will take place at the Wosk Centre, 580 West Hastings Street, is free but limited to the first 160 people. Pre-registration is required.

The BC Healthy Connections Project (BCHCP) today officially launched Phase II of its scientific evaluation of the Nurse-Family Partnership program.

Developed by Dr. David Olds more than 30 years ago, Nurse-Family Partnership (NFP) involves nurses visiting disadvantaged young women — who are preparing to parent for the first time — in their homes, roughly twice a month. These home visits start during pregnancy and continue until children reach their second birthday.

The BCHCP is the first-ever Canadian evaluation of NFP to determine whether the program is more — or less — effective than existing services in BC. The goals of the NFP are to improve pregnancy and parenting outcomes and child health and development, while also helping mothers to become economically self-sufficient.

Until the scientific evaluation is completed NFP is available only through this project. Please see Referral Information, below.

Phase I of the BCHCP actually began more than 18 months ago when 52 public health nurses and 10 supervisors from across the province began their NFP education.

Today, these public health nurses are well prepared for Phase II — involving more than 1,000 mothers and children over the next five years. Using rigorous evaluation methods, half these women will be randomized to receive NFP while half will receive existing services. Child and maternal outcomes will then be compared when mothers and children “graduate” — when children reach their second birthday.

“When I first heard about the project I was ambiguous,” she says. “I wasn’t clear how it differed from the work I was already doing with high-needs families.” Eventually she attended an information workshop and was captivated by a video clip of NFP’s developer David Olds. “He talked about what the nurses did in the US and he quoted one of them saying something along the lines of, ‘it’s the hardest, most rewarding work I’ve ever done.’

For Mary, in turn, the opportunity to receive one-on-one parenting support from a public health nurse has been “fantastic.”

Mary was recruited into Phase I at the maternity clinic in Kamloops and saw the benefits almost immediately. “It was a bit awkward at first because I’m a little shy,” she says. “But once we got talking I knew it would work out really well. She’s one of those people who’s really easy to talk to.”

In fact, Mary’s so impressed she’s encouraging her friends to consider contacting their local public health unit to see if they are eligible to participate in the BCHCP. (See Referral Information, below.)

The BCHCP is being funded by the BC Ministry of Health, with support from the BC Ministry of Children and Family Development and five participating BC Health Authorities. As well, funding is being provided by the Mowafaghian Foundation. Charlotte Waddell and Harriet MacMillan are the Nominated Co-Principal Investigators. Susan Jack and Debbie Sheehan are the Co-Principal Investigators. Nicole Catherine is the Scientific Director.

For the duration of the BCHCP recruitment, NFP is accessible only through this scientific evaluation. To be eligible to participate in the BCHCP, women must be: parenting for the first time; aged 24 years or younger; able to speak English; and less than 27 weeks gestation (ideally 10–24 weeks).

Referrals are not made directly to the study. Rather, women should be referred or should self-refer to their local public health unit where a public health nurse will screen them. The study will then be explained and eligibility to participate will be confirmed. 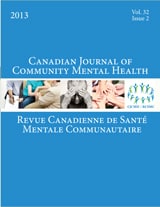 Canada should make a commitment to a population health approach to Children’s mental health —promoting health and preventing disorders, in addition to offering treatment. But in order to do so effectively, it needs to collect more data. That is the conclusion of a new academic paper by Charlotte Waddell, director of the Children’s Health Policy Centre. Her co-authors are: Cody Shepherd, Alice Chen and Michael Boyle.

Published in the Canadian Journal of Community Mental Health, the paper argues that indicators — data from existing public sources such as the Medical Services Plan and Vital Statistics — should be a starting point for monitoring Children’s mental health before disorders occur.

Given that 14% of children in Canada experience mental disorders and that only 25% of these children receive treatment, “the potential benefits of undertaking these three options are immense,” the paper concludes.